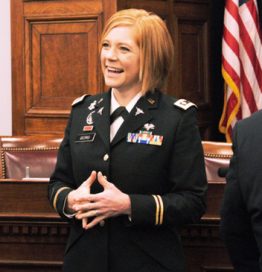 Major Georgi is a 2008 graduate of the University of Alabama at Birmingham with a B.S. in Psychology. She earned her commission through the ROTC program at UAB as an officer in the Army Medical Service Corps. Her first assignment was in an Infantry Brigade in charge of the Brigade Aid Station at Fort Bliss, Tx. Early in her career she chose a Health information management path in the Army, taking her first HIM-specific assignment at Kenner Army Health Clinic at Fort Lee, Virginia. She was the Honor Graduate of the 2011 HIM/PAD officers’ course at Fort Sam Houston, Tx as a lieutenant. In 2012 she volunteered to deploy with 14th Combat Support Hospital in support of Operation Enduring Freedom at the British Trauma Hospital in Helmand Province, Afghanistan. She served as Chief of HIM/PAD for the US, working with the USAF and Royal Air Force conducting patient tracking, movement and management of US medical records. Returning to Ft. Lee, she led the base clinic’s HIM department. In 2014 she was assigned to Germany as the Medical Regulating Officer of the 30th Medical Brigade, introducing her to NATO missions and the Patient Evacuation Coordination Cell during large NATO exercises. She then commanded a company within Public Health Command Europe on Landstuhl in 2016. Her recent assignment exposed her to military health care strategic vision and planning as the Secretary of the General Staff of Regional Health Command Europe Headquarters, directly reporting to the Commanding General.

Her short-term goals include maintaining a 4.0 in both the ECU Masters and Certificate programs and obtaining RHIA credentials prior moving to Ft Carson, Colorado in July of 2020. Her long-term goal is to be the leading Patient Administration Officer for the Army. She is married to a retired German naval officer and they have a 2-year-old son.